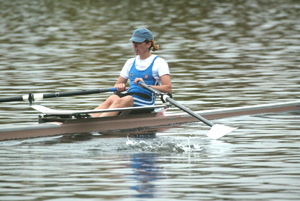 CB Sands-Bohrer has 30 years of rowing and coaching experience and is an 8 time National Team member winning 2 gold medals at the World Championships in the lightweight double sculls (86'/89') and a bronze in 1984 and 1987. CB was inducted into the National Rowing Foundation Hall of Fame in 1997 and recognized again by the NRF in 2000. CB lived and trained in Europe for a number of years giving her the opportunity to train with some of the best names in rowing and to compete in many World Cup races. Noted people that influenced her rowing career are Kris Korzeniowski and the late Harry Mahon, former coach of the Swiss, New Zealand and British National teams.

CB coaches Jr Girls and Boys with Cambridge Boat Club's competitive youth program with head coach Abby Knight. CB also consults with CRI on development for all levels of coaches. She has been a coach for CRI Masters and Juniors, a guest coach at Northeast Rowing, the Craftsbury Rowing Center and the Union Boat Club Jr Boys Summer Sculling Camp. She is a certified personal trainer (CPT) and has been a volunteer for AccesSportAmerica, a non-profit organization dedicated to the fitness and function of children and adults with disabilities.

CB stays fit by a regular schedule of rowing, consistent strength training, erging and hiking. She has been a first place finisher at the Head of the Charles for many years, winning her age group in the 1x, 2x and 4+ while setting course records in the 2x and 4+ by over 30 seconds.

CB and Tom have been married since 1992 and live in Concord, Massachusetts and have three children.

Contact us at if you have a question or would like help designing a program for your needs.

CB in the Head of the Charles: photo by Susan Parkman